Kariya (JAPAN) - January 26, 2022 -Toyota Boshoku Corporation (Global Mainstay Hub: Kariya City, Aichi Prefecture, Japan. President: Takeshi Numa) has developed seats and interior components featured in the new LEXUS NX that was released in October 2021.
1.Seats
Front seat
Simulation technology was used to analyze and optimize the seat's shape, resulting in the development of a well-tailored seat befitting a LEXUS. A deep-suspension structure draws the seat cover in deeply. The tension of the seat cover when seated is absorbed by the deeply suspended area, which reduces the feeling of tightness and improves cushioning by decreasing the concentration of pressure on the buttocks.
In addition, seats for the F-SPORT utilize Toyota Boshoku's integrated Form in Place Method. Adopting a similar cross-sectional shape and structure to the LEXUS LC seats has resulted in greatly improved hold performance. The new seats are ideally suited to the performance of the F-SPORT.

Rear seat: 6/4 split folding seats (with Power-folding function)*1
The rear seats are equipped with a dual-position seatback lock mechanism that significantly reduces the number of parts and weight, thereby contributing to improved fuel economy. In addition, the newly developed electric retraction/return mechanism for the rear seats increases convenience by reducing operation time by more than 30% compared to the conventional.
There are three control switches to expand the luggage space: 1. a soft switch in the touch display, 2. a switch in the luggage compartment, and 3. a switch on the side of the rear seat*2, all of which can be used to electrically retract or return the seat. The shoulder lever can also be used to manually retract and return.
*1 Standard equipment for NX350h Version L and NX250 Version L Factory option for NX350h F SPORT and NX350 F SPORT
*2 Switch on side of rear seat is for return only 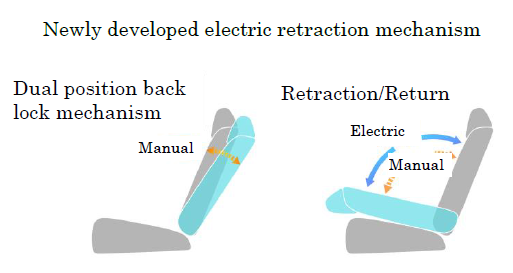 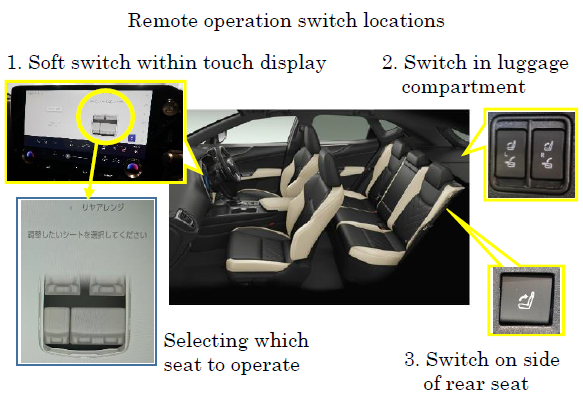 2.Interior
Toyota-first Door trim: Pull handle with a static electricity removal function*3
The discomfort of static electricity that often generated when closing the door in winter or when the air is dry has been reduced to improve comfort. This is done through the use of a newly developed conductive resin for the pull handle in the door trim.
The conductive plastic resin is located inside the pull handle and is integrated into the design of the door trim. When getting off the seat while holding the handle, static electricity on the body can be released without causing a shock.
*3 Jointly developed with Tokai Chemical Industries, Ltd. Equipped on the front door trim of right-hand drive models

3.Unit parts
Oil mist separator
To cope with the new 2.4L inline four-cylinder turbocharged engine, Toyota Boshoku has developed a new shape oil mist separator that separates engine oil and blow-by gas*4. It is mounted on the side of the engine cylinder block and has contributed to preserving engine performance.
*4 Unburned gas that leaks into the crankcase through gaps in the piston rings during the engine's compression and combustion processes