Kariya(JAPAN) - March 25,2022- Toyota Boshoku Corporation has developed seats and door trims that are featured on the new LEXUS LX launched by Toyota Motor Corporation in January 2022.

1．Seats
【Rear Powered Seats Exclusive to Executive Grade】
New seats developed by Toyota Boshoku reduce the effect of unpleasant vibrations when traversing bumpy roads for long periods of time, contributing to a cozy, comfortable interior space to travel in.
In an effort to offer more leg room for passengers in the rear, the design of the front passenger seat allows it to be moved further forward compared to seats in other grades. Also featured is an ottoman that is independent of the rear seat. It is located on the back of the passenger seat, allowing its position to be adjusted by sliding the passenger seat to match the occupant's physique and desired placement. The sliding passenger seat can be adjusted from the rear by hand via a rear control panel. In addition, the passenger and rear seats can offer safe, stable, and comfortable posture while traveling. It supports the whole body from head to toe, featuring (1) a maximum 48-degree reclining mechanism, (2) a seat angle adjustment mechanism, and (3) the ability to adjust the headrest forward and backward.
Of particular note is the adoption of a large-size headrest that comfortably supports the head. 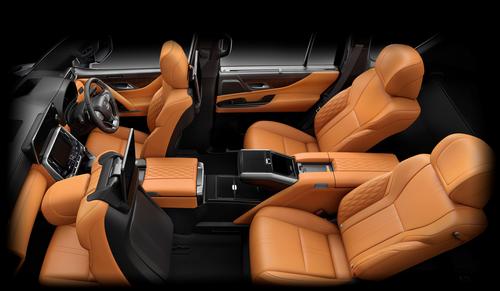 The walk-in mechanism involves a switch on the shoulder of the second-row seat that automatically (1) moves the front seats forward, (2) folds the second-row seat and flips it forward, and (3) makes it easier both to get in and out of the third-row seats and to expand the luggage area. 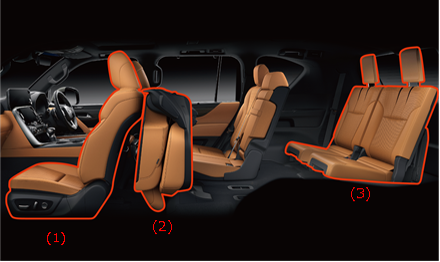 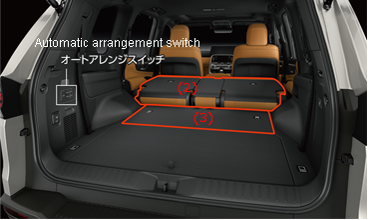