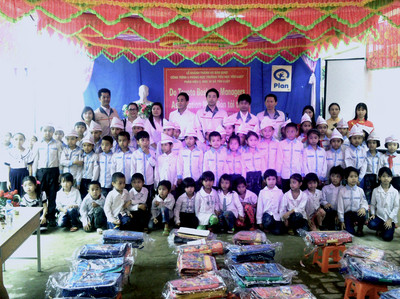 Kariya (JAPAN) – April 25, 2014 – Toyota Boshoku Corporation (TOKYO:3116, President: Shuhei Toyoda) has announced that its Managers’ Association*1 has helped fund the construction of a new schoolhouse for a branch of Yên Luật Commune Primary School in the Ha Hoa District of Vietnam’s Phú Thọ Province. This marks the second time in Vietnam to aid the construction of a school, since the Manager’s Association started this annual project in 2006 and has been continuously supporting similar projects in Asian countries.

An inauguration ceremony was held on April 25 to mark the opening of the new school and was attended by pupils, school officials, people involved with the project from the local government, and representatives of Toyota Boshoku Haiphong Co., Ltd., and Toyota Boshoku Hanoi Co., Ltd., the Toyota Boshoku group’s production companies in Vietnam, as well as the Manager’s Association. Total attendance was 120. In the inauguration address, association chairman Kenichi Hashimoto wished the children and staff of the school many wonderful memories in the new schoolhouse, which he hoped would become an integral part of the town.

Developing nations face challenges in maintaining education infrastructure, as climate change and financial difficulties cause facilities to become run-down and fall into disrepair. In order that children in these regions can learn in a safe, sanitary environment, the Toyota Boshoku Managers’ Association has, since 2006, been cooperating with Plan Japan*2, an international NGO, to help maintain education infrastructures in areas like these, particularly in Vietnam, Indonesia, the Philippines and Thailand, where the Toyota Boshoku group has production companies.

The Toyota Boshoku group is dedicated to ongoing activities based on our principle of “aiming to promote corporate growth while fulfilling our responsibilities as a good corporate citizen” and to meet the needs of individual regions to promote global social contributions.

Overview of construction of the Primary School