Collaboration in the Construction of Primary School Building in Thailand

In the ASEAN region, there is an actual situation of children being unable to receive safe and suitable basic education, due to dilapidated buildings and a lack of facilities. The Toyota Boshoku Management Committee, in cooperation with the international NGO group Plan Japan (2), has actively supported repairs and new building construction for the primary schools that face these problems. Activities began in fiscal year 2006 and are now in their 5th cycle. Activities have been taken primarily in regions where Toyota Boshoku has local operations in Indonesia, Vietnam, and the Philippines.

Toyota Boshoku, in response to regional issues, will expand its social contribution activities on a global scale to promote the development of society, and promote corporate growth while fulfilling our responsibilities as a good corporate citizen.

Notes:
(1) 494 members. A voluntary organization of Grade 3 managerial class personnel in Toyota Boshoku. This organization puts emphasis on global activities that contribute to society, helping construction of elementary schools abroad, as well as carrying out a number of volunteer activities such as cleaning local areas, and managing local welfare events in Japan.

< Outline of the construction of the school building > 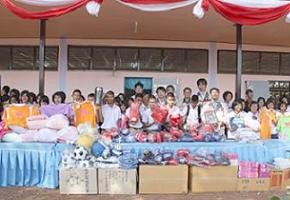 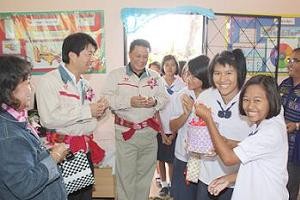 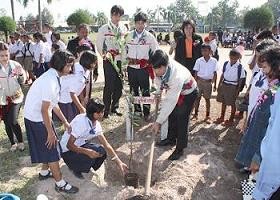