Toyota Boshoku Corporation (Head Office: Kariya, Aichi; President: Shuhei Toyoda) has recently started a full-scale development in Indonesia of seeds of the kenaf (an annual plant), which is used for automobile interior parts.

From the latter half of the 1990’s, Toyota Boshoku has been conducting research on utilization of the environmentally-friendly plant “kenaf” for automobile interior parts, and for that purpose, PT. Abadi Barindo Autotech (ABA), Boshoku’s subsidiary in Indonesia, has been conducting an integrated process from cultivation through productization. A door trim base material using kenaf was first adopted for TOYOTA Celsior which was launched on the domestic market in 2000. With that as a starter, currently, kenaf is being used for five components in a total of 27 car models centering on high-end cars.

However, with the target set at making all interior parts from plant materials, in using the agricultural product kenaf for industrial automobile interior parts, it has become more vital than ever to stabilize its quality, production volume and cost. With that in mind, we have entered into a kenaf seed development agreement with IToFCRI* in Indonesia to embark on a full-scale seed development program.

The seed development agreement was signed on March 27, 2008 in Jakarta, Indonesia, in the presence of Prof. Dr. Achmad Suryana, Director General of IToFCRI, Mr. Mitsuyuki Noguchi, Executive Vice President of Toyota Boshoku Corporation, and all the parties concerned. In the coming years, jointly with IToFCRI, we will pursue the development of new varieties which secure stable crop yields including seeds which can grow in dry regions, seeds of an early maturing variety, etc., and the research on new plants that can be applied for automobile parts.

* IToFCRI: Indonesian Tobacco and Fiber Crops Research Institute World’s leading research institute with a 50-year experience in the field of kenaf seed improvement as well as the storage of its data and improved varieties. 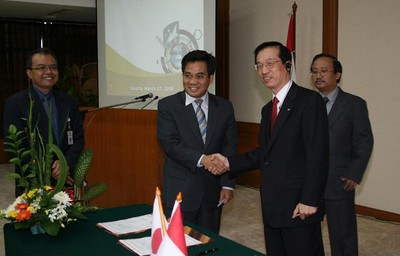