The TB-NF110 series of front seat frames is composed of four basic parts – seat cushion, cushion spring, seatback, and seatback spring. The frames can be configured for use with manually-adjusted and power seats, and are compatible with a variety of vehicles. In addition, it will be possible for Toyota Boshoku to produce these seat frames on a global scale in every region of the world. Production of these seat frames began in the United States in January 2010.

The seat frame was designed to provide excellent riding comfort and performance for the occupant, and to be lighter than existing seat frames. The “TB-NF110” series is made with 980 MPa-class high-tensile steel which reduces the bulkiness and weight of the frame by 10%. A thorough review of the seat frame structure and the shapes of the parts was conducted, resulting in a reduction of the number of required parts and fastening points by about 25%. Riding comfort was analyzed, and the sitting pressure and holding performance of the seat cushion was improved.

In addition, due to the change in the seat frame structure for the TB-NF110 series, it was possible to make the profile of the seatback thinner, helping to ensure a more spacious vehicle interior, and provide more leg room for rear seat passengers.

The Toyota Boshoku Group seeks to “actively meet the needs of society by providing products that possess the quality and price demanded by customers throughout the world, when the products are needed, and where they are needed” as a single global company. Toyota Boshoku will continue to approach auto manufacturers throughout the world via its global production footprint to expand the number of vehicle models that use the TB-NF110 series seat frames. The group will also undertake the development of common rear seat frames with the same forward thinking that guided the development of the TB-NF110 series of next-generation seat frames. Toyota Boshoku is an automobile interior systems supplier determined to create a safer and more comfortable interior space for automobiles.

About Toyota Boshoku America, Inc.
Toyota Boshoku Corporation is based in Kariya City, Japan, with more than 80 operations in 22 countries. It’s wholly owned subsidiary, Toyota Boshoku America (TBA), and its affiliates employ about 6,000 team members in 20 locations throughout the United States, Canada, Mexico and Argentina. TBA is a premier manufacturer of automotive interior systems which include seats, door trims, headliners and substrates, carpets, fabrics and straps in addition to air and oil filters for a variety of customers such as Toyota Motor Corporation and General Motors. 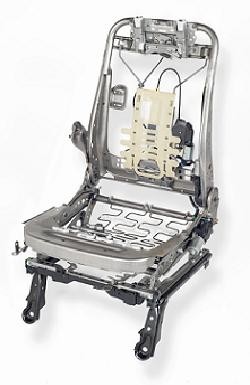