CFRP (Carbon Fiber Reinforced Plastics) are utilized for the main body※2 of this new seat and the strength and rigidity of the seat were raised to the maximum limits while also realizing an extreme reduction in the weight through creative manipulation of the fiber orientation of the carbon fabric. Furthermore, the shape of the main body of the seat and the urethane pads on each portion were optimized so that the driver’s whole body is supported with excellent balance, even under the severe changes in speed experienced during racing. In addition, a special surface skin was adopted that has superior durability, molds itself easily to the driver’s body, and features a unique design that has never been used in conventional racing seats. Toyota Boshoku has applied all of the technological innovations it has developed up until now to achieve both an unparalleled level of performance and design in this new seat.

The development of this racing seat began in 2010 and through repeated evaluations of seat performance and improvements thanks to actual on-vehicle testing conducted by the master test drivers of the Toyota Motor Corporation, the degree of perfection of the seat was continually raised. Furthermore, the seat also satisfies the strict safety standards determined by the FIA※3 and we obtained their official international approval.

We plan to fully utilize the new knowledge that was gained from participating in racing in our development of sports seats for regular automobiles, and in the future we look forward to actively offering Toyota Boshoku branded sports seats to automobile manufacturers. Furthermore, as one of the world’s top level manufacturers of vehicle interiors, we plan to offer interior spaces that will excite and enthrall our customers. 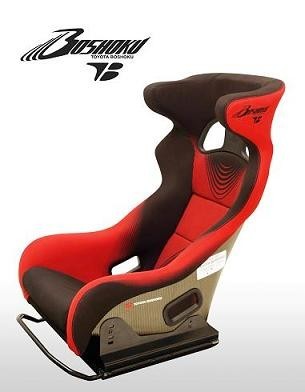 The Sports Seat installed in race cars of GAZOO Racing