Drowsiness Suppression Seat System
This drowsiness inhibitory system comprises a smartphone application and a seat linked to the smartphone.
The smartphone’s built-in camera monitors the face of the seated person and gauges the level of drowsiness in real time in response to the individual’s facial expressions. Based on the estimated drowsiness level, the system intermittently plays and stops music from the seat’s built-in speakers while vibrating the seat in time with the music to prevent the seated individual from falling asleep. A proprietary algorithm is used to select songs that elicit nostalgic feelings in the seated individual to inhibit drowsiness by prompting emotions without Discomfort.
Installing the system in the remote monitor seat of an autonomous vehicle enables the observer to concentrate and monitor safety at all times, thus contributing to safer and more secure operations. 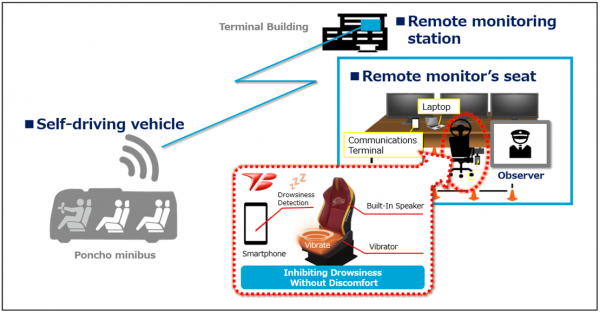